State Finance Minister Eran Wickramaratne last week said the rubber industry had much greater potential in the long haul over other conventional exports that the country had often been focusing on. 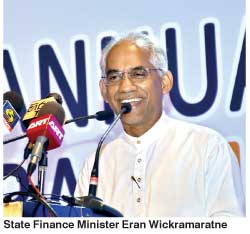 Delivering the keynote address at the Sri Lanka Association of Manufacturers and Exporters of Rubber Products (SLAMERP) 31st Annual General Meeting, he stressed that the industry had contributed significantly in attracting investments and job creation and raising foreign exchange earnings.

“I hope the rubber industry is not going to get caught up in decades-old debate that the tea industry is having and your industry will move forward facing the realities of the day,” he added. However, Wickramaratne stressed on the importance of steadfast dedication with eagerness to foster more investment partnerships, insisting that it was the way forward.

Noting that the Budget 2018 had given priority to exports and R&D as a central part of the country’s economic strategy, he said the Rubber Master Plan 2017-2026 targeted achieving an annual gross industry turnover of nearly $4.4 billion by 2025.

“Now this requires an investment which is estimated at more than $ 1.5 billion over the medium term to augment the existing investment to reach such potential,” he added.

He assured that the Government was committed to strengthen the rubber sector by providing critical soft and hard industry infrastructure that the private sector demanded.

Acknowledging that the industry had to deal with limited land area, adverse weather patterns, increased cost of labour and production as well as skilled labour shortages, Wickramaratne said it was imperative that firms deployedthe latest technology to enhance yields and reduce the cost of production.

The State Finance Minister emphasised that the private sector would have to play a pivotal role in bringing productivity, enhancing technology and harnessing product innovation to combat fierce global competition.

Insisting that the country needed to regain the lost pride in the industry, he recalled that the rubber industry had helped the country overcome major crises in post-independent Sri Lanka.

“There was an acute shortage of rice amidst the skyrocketing international prices in the 1950s. The famous Sino-Lanka Rubber Rice Pact was inked in 1952 to feed this nation, expanding the way for bilateral relations between Sri Lanka and China tremendously, leading its way to strong economic cooperation between the two countries as we presently witness,” he pointed out.

Pointing out that rubber prices were subject to cyclical price shocks, he asserted the country needed to prepare to withstand the headwinds that may come from time to time. “Such risks and challenges may surface not only due to trade and technological factors but also due to environmental and social factors,” he added.

Wickramaratne emphasised that the Government’s short to medium term focus was to raise industry standards as Sri Lanka ranked low in most productivity measures such as land productivity, export value per employee and so on.

“We need to enhance the capacity of the rubber producers, particularly the smallholders. As the Government, we are keen to help the smallholders with various programs. We must think collectively how industry participants can help each other to compete with the rising synthetic rubber industry; perhaps more importantly let us work together on how we can make use of the synthetic rubber industry as a complement and not as a threat in achieving superior performance standards of natural rubber products.”