Asserting that the country is facing a serious situation with the ongoing political crisis, the Sri Lanka Association of Manufacturers and Exporters of Rubber Products (SLAMERP) has issued a statement requesting President Maithripala Sirisena to bring about political stability in the country and ensure ministers portray their discipline and responsibilities.

In its statement, SLAMERP mentioned that the lapse of one month and the communications that the country is publishing in media are pushing away global buyers, manufacturers and investors which will affect the export sector’s sustainability and growth. 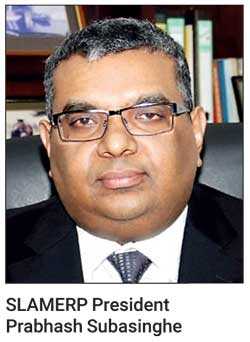 SLAMERP President Prabhash Subasinghe said that Sri Lanka needed to expand exports to face the current problems that the country is facing financially, and the rubber manufacturers and exporters are seeking stable Government policies and a signal to the world that Sri Lanka is a country that is governed by the rule of law to attract investors to expand the manufacturing-based export sector.

“We need to create a very strong image to the buyers informing them that we have a stable economy politically and otherwise and Sri Lanka is a strong and safe country for business investments.”

SLAMERP further stated: “As an industry we are disappointed about this situation which has dragged this issue for more than four weeks and as a result many State institutions have become inactive and the National Budget and policies for 2019 are at a standstill. We, as an industry body that brings in $ 1 billion to the national economy and creates a large amount of rural employment, see dire consequences for the export industry and the country if we don’t see a resolution fast. Furthermore, Sri Lanka has the potential to become a 10 billion rubber export industry in the near future, hence SLAMERP calls on the leaders to establish normalcy in the country without any further delays.”